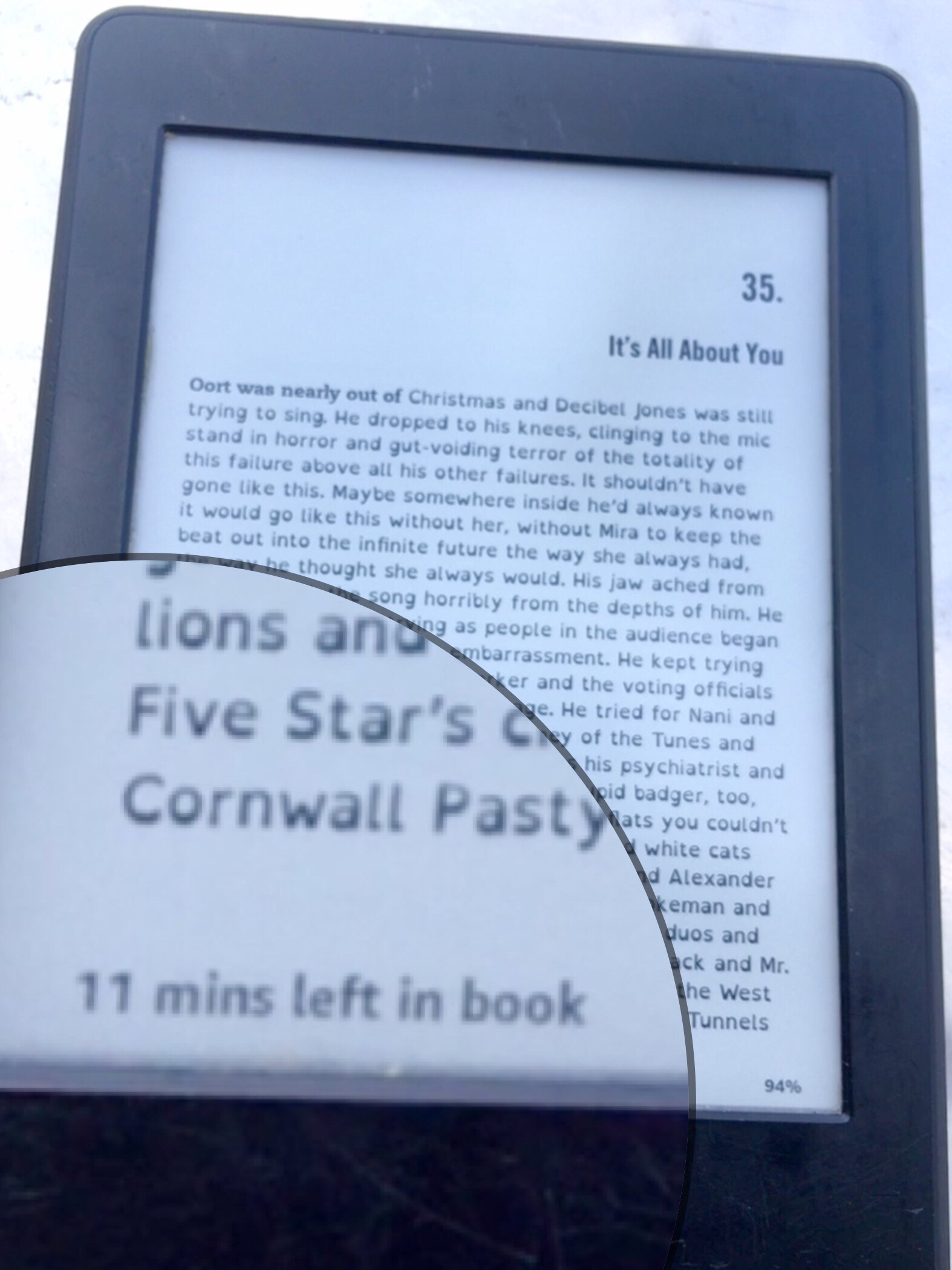 I read Wheel of Time a couple years ago.

By that I mean I started reading it a couple years ago.

It actually took me about thirteen months to finish it, which means I was really moving, because the series is, uh… big: it consists of fourteen books weighing in at nearly twelve thousand pages.

The audiobooks take, are you ready?, nineteen days to listen to.

Understand that I am a reader, dear reader.

So, I’ve been reading since I was three.

I usually have three to five books going at once.

I never don’t have a book I’m currently reading.

Before the Kindle, I always had a book with me.

After the Kindle happened I always have all of my books with me.

I read alone at bars when other people are watching basketball.

I read on line at the grocery store when Helen is writing her $2.05 check to buy her pack of gum.

I read in the car when someone else is driving. I read in planes when I’m not in fetal position because the plane obviously is going to crash because planes go 300 miles per hour on the ground and that is not natural, and, back when I had classes, I would read in classes when I was supposed to be listening to someone talk about the thing I was reading.

That all changed when I finished Wheel of Time.

I had gotten so well and truly sucked into the series that I stopped reading anything else.

For over a year I always only read those books.

When I was finished it felt like I’d completed an ultra marathon, brain wise.

The series has an incredibly satisfying ending, I was amazed at how well the whole thing got tied up, I couldn’t wait for my wife to read them too so that we could talk about them, and, I had a whole queue of books I was itchin’ to get to cause I’d been throwing titles on a “to read” stack for over a year, and what could be better than finishing such a wonderful thing?

I’ll tell you what could be better: a gawddamn root canal, that’s what.

The thing is, those books ruined me for reading.

I started and fizzled out maybe fifteen books.

I could not enjoy reading.

I have always enjoyed reading.

I tried enjoying reading harder, which is not even a thing.

I got afraid that I could never enjoy reading again.

I panicked harder, which is totally a thing.

Eventually I decided that all of that was dumb and that all of this would sort itself out and I should just not try to force it and try something else for a while.

I watched some TV, which I’d not really done in a long time. I had heard that this show called “Parks and Rec” was pretty good, and it was. I watched nearly all of them and… still haven’t finished the last three episodes.

I watched more movies than ever before. That means that I actually watched movies I had never seen before, instead of just watching Ocean’s 11 or Harry Potter over and over and over.

Some of them ended up being pretty good — turns out people were right about that whole “Marvel” thing. ¯_(ツ)_/¯

I figured when I wanted to read again I would.

It took a year.

Nearly exactly twelve months after finishing book fourteen of Wheel of Time I read a review of a new comedy science fiction book called Space Opera, and, I had felt spark of excitement that I’d not felt in a very long time.

I want to read this book, I felt, barely recognizing the feeling.

I found it on Amazon, not easy given that it’s name is also a genre, bought it, and had started reading it within three minutes of learning of its existence.

I fell in love with it instantly and was pleased to discover that I had finished three chapters before it had occurred to me that I was reading again (!).

Then I had a weird idea about the nature of time and started doing some digging and ended up reading a whole bunch of physics stuff that sidetracked me for a couple weeks, but that’s been fun and exciting too, and deserves it’s own space, so I will reserve all of that for other posts, but, the point is I was enjoying reading again and now I’m almost done with that book.

So instead of finishing it I took a photo of my accomplishment: I am eleven minutes away from killing the first fictional book I’ve been able to get into in over a year.

I will post this, sip some beer, and do this thang.

This site uses Akismet to reduce spam. Learn how your comment data is processed.