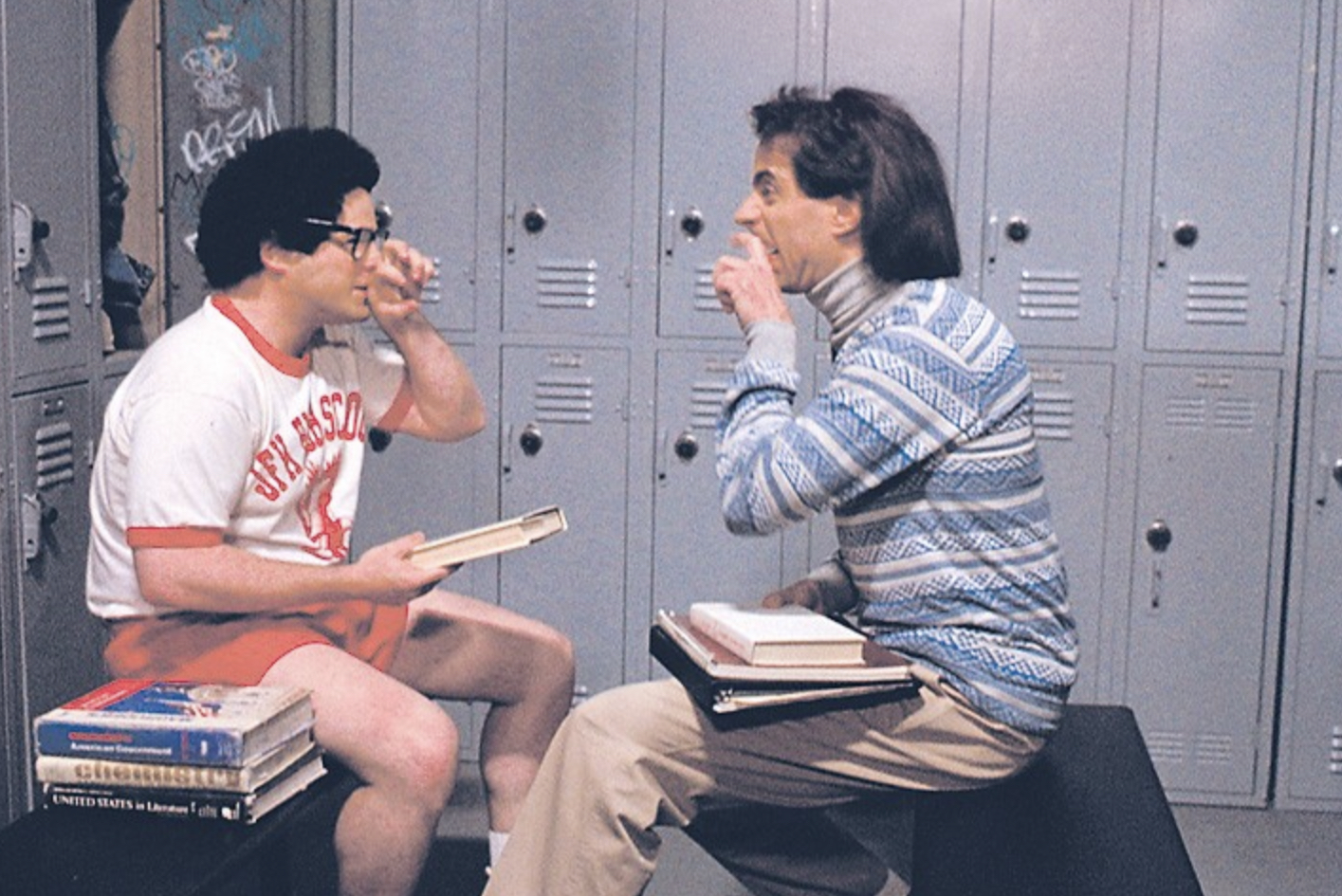 Filled with flashbacks to Jerry and George’s days in high school, this episode finds both characters haunted by their past as Jerry is hounded by a library cop for a book he allegedly didn’t return in 1971 and George is convinced a homeless man is his old atomic-wedgie-giving gym teacher. Meanwhile, Kramer becomes involved with a librarian and Elaine is having trouble impressing her boss. Paul Thomas Anderson-regular Philip Baker Hall guest stars as Lt. Bookman, the library cop. Viewers may wish to note that the role of Elaine’s boss, Mr. Lippman is played here by Harris Shore. Richard Fancy would assume the role in all subsequent episodes.

Originally airing October 16, 1991, “The Library” was the fourth episode shot for the third season, despite being the fifth one shown.

This is one of my favorite Seinfeld episodes.

“Mr. Bookman”, if I recall the character’s name correctly, makes the show with his surprise rapid-fire delivery of old-timey cop vibe about an unreturned library book.

Kramer’s passionate love affair with the poetry-writing librarian is a solidly funny storyline, and the whole “Tropic of Capricorn/Cancer” thing with the gym teacher and George getting an atomic wedgie… this episode is hilarious.

Sherry Becker is the name of Jerry’s crush in high school.

Kramer’s instant assessment of the librarian is hilarious.

​Mr. Haymen​ is the name of the gym teacher.

08:57, Elain, upon hearing Jerry explain to her what a wedgie and atomic wedgie are: “Boys are sick.”

“We just tease someone until they develop an eating disorder.”

09:50, Mr. Bookman begins his first rant, about coffee, and how Jerry doesn’t have any.

You can see Jerry trying not to laugh as the guy gets going.

It is a really really funny bit.

I was laughing out loud here, in my headphones.

The main joke here, that Jerry really ​did not return the book​, is based upon a thing I think about a lot: the fallibility of the human memory system.

High-school-aged Jerry and George are fun.

The librarian’s poem is ​not good​.

16:04, Bookman, “While you’re thinking about that, think about this: the library closes at 5pm, no exceptions.”

Jerry was way ahead of his time trashing Columbus.

Mr. Bookman is even funnier than I remembered.

Kramer is so funny in this episode.

This is one of my favs, for sure.

My nose is in view every time my eyes are open. I almost never see it.